Once Ketan had given the go ahead, we went into the all important task of kick-starting the film. The thing about being from a film school is that you are never really short of technicians. I had to make a few calls and I was all good to go.

My good friend Sudhakar Yakkanti flew down from Hyderabad to shoot the film, Suvir Nath agreed to share the editing burden with Neeraj, Dara Singh agreed to do the sound while his wife Dahilya was gracious enough to do the styling and help the Art Director Amit Tankaria out with the production design. No money was discussed since I didn’t have any and I owe it to them for never short changing me on the quality inspite of a measly budget.

In film making, my view is that the Director is merely a nominal head. A film starts with the script. Post that, every little thing that somebody else does, adds to taking the film a notch higher or lower than the written word. Rewind, I feel, was a complicated film to make, but every team member added just that right amount of effort and creativity to try and take it beyond the basic material.

Listed below is the process :

The Location & the Production Design 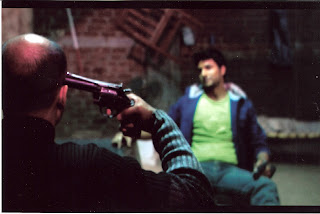 Rewind is a film about three gamblers playing the Russian roulette to claim an undivided heist of diamonds. The trick is to be the last man standing in a game of death. Considering the nature of the plot, the location had to be necessarily isolated. We also considered an outdoor location surrounded by palm trees in Madh Island, but some things didn’t work out. Eventually, we zeroed in on an underconstruction building in Film city. We wanted the space of the film to be slightly weird but not illogical. Amit worked his heart out to create a wonderful set. When you watch the film, there are bizarre things like a chair hanging on a wall in the background which contributed to the overall quirkiness of the film. 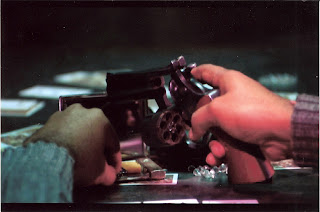 Sudhakar is an old friend. We go back to the first day of the interviews at FTII and have been thick since. Some other DoPs (Director of Photography), I have worked with, merely want to come on a set and start shooting, as if that is the most important thing to do in a film. There is no real understanding of what the scene demands and they are very reluctant to discuss camera movement and lighting at a more micro level. With Sudhakar, there is never any ego about who the director or DoP is. We have a wonderful rapport and most discussion happens over a drink. Between us, Sudhakar’s contribution is not merely limited to lighting and shooting a film. In whatever work we have done together, we have always tried to work on the camera at the script level, rather than just look at it as a tool to shoot a film. In Rewind, we agreed to keep the camera moving continuously to maintain the momentum of intrigue. The shot taking was deliberately long and without too many cuts. There are not more than 12 shots in the film. Incidentally, a lot of beer (over discussions, of course) was required to keep the shots to a minimum 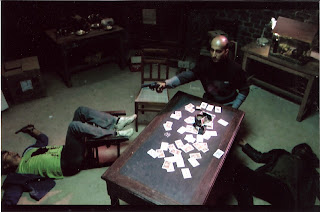 Before we landed up on a set, there were some key questions I needed answers to. What happens when an entire narrative moves in reverse? How does one maintain the drama of the screenplay in the shot taking? How does one keep the grammar of the shot taking forward while the action in the film moves backwards? The essence of a reverse film is in its design. Essentially, the beginning becomes the climax of the film and vice versa.  Our biggest worry while shooting Rewind was that while watching the final film, one should not get the feeling that the film was merely shot straight and then just reversed in the editing room. That would defeat the very purpose of making a reverse film and tantamount to cheating the audience. It was imperative that after watching the final film, the audience should derive the same satisfaction as they would after watching any good film. The most important decision we took was to adhere to the grammar of Linear shot taking while shooting the film  ... but in reverse. I can’t take the sole credit for the shot taking or the shot division. I strongly feel that the DoP should necessarily be a very integral part of the Shot division process (which is rarely the case in the real world). The DoP, Sudhakar, was an integral part of the process and that, I believe, shows in every cut and frame of the film.

We were always clear that it was a real time film ... that is to say that the amount of time spent by the characters on screen was the amount of time they would have actually spent in the room playing the Russian roulette. In such a case, action continuity was key. The bigger problem was that the action continuity had to match the reverse cut ... since what we were doing was shooting the film straight, reversing the shot on a machine and doing the match cut with the earlier shot. The only way to not screw up big time was to do an on location edit, so there we had Suvir Nath and Neeraj Grover matching every shot with  the earlier one before we moved on to the next. Inspite of all that, we did goof up twice ... once when Chiknya takes out the other gun from his shoe. What we had missed out in the earlier shot division was the action of him taking the gun out. It was strange to see none of that matching and it took us a good 15 minutes before we figured out where we had botched up. We added the movement of Chiknya’s hand moving down to the gun and removing it ... and voila ... there we had  ... the perfect match cut.

The styling of the film had to match the characters. Chiknya was flamboyant and cool; Partho was rough while the Blind man was sober. The colour tones had to match their personality traits. Dahliya got the perfect clothes for the three. Whenever I watch the film, I am amazed by how different each of them looks. That is all Dahliya Kaur there. The old kettle in the film is also the invaluable touch of the art director in her.

I have never had so many sleepless nights over sound design as with Rewind. The film was moving in reverse. The big question was whether to place the effects in reverse. We tried umpteen experiments. The effects in reverse were sounding real strange, so eventually we ended up placing them in linear.  Earlier, we tried to get a background score composed for the film. It didn’t work at all. It is to Dara’s credit that the entire film is actually full of effects and one hardly misses any background music. The lone song, beautifully composed by Bapi-Tutul and rendered by Sunayana Sarkar Dasgupta, appears on the titles at the end of the film.

Then I had wanted Shiv Subramanyam to play the Blind guy, but Shiv had some personal problems and he couldn’t allocate the dates at the last moment. I have always loved Shiv’s deep baritone. He was kind enough to agree to be the Blind man’s voice. As for the actors, I needed them to look completely distinct from each other. Raj Singh Verma, Rajeev Mishra and Saleem Javed fit the bill perfectly

Here I have to mention Nitin Sethi and Bhavin at Glamsham who supported the film throughout. Rewind would have never seen such extensive press coverage without their involvement

It took three months of post production to complete the film. Rewind opened at the Locarno International film festival in 2007, was invited to more than 50 International film festivals and won Grand Jury prizes at the Seattle and the Victoria Independent Film festival. It was then the only Indian short film to have an all India theatrical release (thanks to the team at PVR). It is amongst the only two Indian short films to be available for sale on Apple iTunes in the USA, UK, Canada and Germany. Last month, the DVD of Rewind was launched by Indieflix in the USA.

For a short film, it probably achieved more than what most feature films manage after spending a lot of money. It has been a wonderful closure for a film which started of due to fortuitous circumstances as a 100% loss proposition and was financed to fulfil the childhood dream of someday producing a film for my Producer Ketan Gohil.

More recently, I saw the 2005 Stanford Commencement Speech by Steve Jobs. Though the speech per se is filled with cliches that successful people are so eloquent about, one thing, however stayed with me. Jobs talks about how you can only connect the dots in hindsight.

In retrospect, I look back at the missed opportunity of directing the Marathi film far more gratefully. I am sure Rewind would have never happened if I had directed that film.

A couple of years later. Sunil, the writer of ‘Daddy’ met me again. He was now ready to make all the changes in the script, but that opportunity was long gone. Opportunity, I realised, is a big thing in life. When it comes your way, the head immediately reacts pleading with you to grab it with both hands ... but then sometimes ... it is not such a bad idea to stick with your heart ... it probably understands you better.