I passed out of FTII in 2004. By that time, I had 4 bound scripts and was extremely proud of them. It was a healthy mix of a suspense thriller, an action thriller, an arty film on coal mines and a experimental form film on Bar dancers. As I walked out of the gates of my film school, I felt ready to dazzle the Indian film industry with my irrefutable talent

Somewhere along the way in October 2004, I met Sriram Raghavan. Sriram is the guy who had directed ‘Ek Hasina Thi’ and a wonderful diploma film at FTII (The Eight Column Affair). Later he made ‘Johnny Gaddar’ and is now shooting ‘Agent Vinod’. I worked on his scripts for a year and wrote some minuscule parts in ‘Johnny Gaddar’ like Vinay Pathak’s opening card sequence where he catches the cheaters. 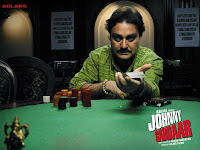 That one year with Sriram was probably the most creative part of my existence so far. More importantly, it opened my eyes to how much I suck at how and what I write. Then I had that style where I wrote for hours, generally finished writing a 25 page treatment within a couple of days and felt smug in my achievement. Nothing wrong with it except that most times, it is actually just starting material to relook at and to consider it as some kind of gospel is plain buffoonery.

Writing with Sriram was sheer torture. You suddenly found your writing being compared to writing in films by Scorsese, Kubrick, Sergio Leone and Vijay Anand. Suddenly I found my talent extremely inadequate and most of what I was writing or had written seemed drivel.

The wonderful thing about Sriram was that he could explain almost everything he needed from a writer with an example. Like he would quote a great line to describe a greedy opportunistic woman from Kubrick’s 'The Killing', “You have a dollar sign for a heart” to make a writer understand what great lines are all about. 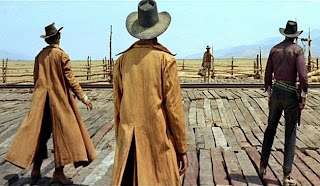 Or he would narrate a whole scene from ‘Infernal Affairs or from ‘Once upon a Time in the West’. Like when Clint Eastwood arrives in town by train. Three of the villain’s henchmen are there to kill him. They pull a gun on him and pointing to the three horses around, say “Sorry but we didn’t bring a horse for you”. Clint Eastwood in his now famous drawl retorts, “Looks like you brought two too many”, then draws faster than the three and shoots them down.

That one year helped me understand economy of writing, scale, graphing of scenes and the importance of drama in commercial writing ... or rather any form of writing actually.

I have always believed that in cinema, everything is on screen for one to learn from.  The practical aspects of filmmaking, one can learn in a film school or hands on ... the only difference being that in a film school, there is no external commercial pressure and one is more free to discover one's cinema.

Personally, for me, a Guru, in cinema or in life, is merely a nomenclature. Sriram is the closest I came to having a Guru. It was a wonderful time when all that one believed fell by the wayside and one felt liberated enough to learn more.

In that one year, I was paid a pittance but always felt lucky that Sriram was not charging me for all those inputs. He helped me understand the importance of good writing as genuine basic material towards making a good film. More importantly, to never let your guard down since it was so easy to go wrong in the writing ... and once you went wrong with the written word, you could possibly make a box office success riding on the back of a big star but will never make a good film.

Sriram was probably the only Director I worked with where the money was irrelevant. It was almost like going back to school and being berated for bad spellings. The biggest takeaway was how falling in love with what you write or shoot is the biggest trap of all and where criticism on a script is probably the best thing that anybody can offer as advice.

Probably that is the reason that I always find it a bit silly when I read about films written within a week. Oops ... that probably was just starting material that somebody ended up making into a full fledged film ... no wonder most of our cinema sucks ... Jai Sriram!!!